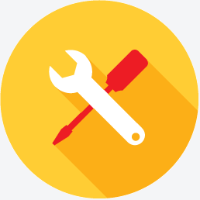 Supported: Android versions defined in Table 2
All versions should be with GMS (Google Mobile Services) except for devices below marked with **

Honeywell device with Granit 1980i

*Note: Keyboard versions are not supported.

Mobile Device Brands
Tasklet Factory recommends mobile devices from Honeywell and Zebra, as we have a long history with many successful projects. We also have direct access to technicians from these companies allowing us to get technical support very quickly. We do have support for other brands as well, and the application will work "out-of-the-box" on the following brands, given the model is listed in the supported section.

Android is the Go-To operating system on new scanner devices, and a platform which is updated almost yearly by Google. When new hardware devices are released, they are born with the latest version of Android, supported by that hardware vendor. A version which is always lagging Googles Official release, but never the less updated to keep with the latest features from Google. With these new versions comes subtle changes, which can cause unintended behavior from applications. As we want to make sure that Mobile WMS runs as intended, our application is tested on all the Android versions we support. Therefore, we have chosen, to have a finite set of supported Android releases, discontinuing support for older versions over time.

It is important to note that when we discontinue support for an Android version, that does not mean that Mobile WMS will stop running on already installed devices. It means that we will not release new functionality in the application for those Android versions, as we cannot guarantee that they will perform in the expected manor.

Over time, there may come new Android releases from hardware vendors for older devices, prolonging the supported lifetime of a device. But that is entirely up to the hardware vendor.

Below is the list of supported Android versions. The “End of development” column states, by the end of which year, new development will no longer target that version.

* Only Zebra and Honeywell are supported, as Datalogic has not yet added support for Android 11.

*Note: Windows Embedded Handheld was declared End of Life by Microsoft the 14. th. of January 2020. Therefore, Tasklet Factory will not do further development on this platform and we highly recommend that any new project are started on Android devices instead.
**Note: The square resolution will be limited with regards to the number of display lines possible to use due to the special screen format. Typically, Mobile WMS will be limited to 3 or 4 display lines.